Continuing to try and figure out how to grab the data from the SDR it struck me I had  a few pieces of the puzzle to complete.

Another look at the available information suggested that the signal I was looking for had the following characteristics,

Having seen the 5 peaks on the spectrum analyzer before I was confident that the SDR could capture the transmissions, but this time I wanted to try and refine things a little.

I had already read that the SDR required oversampling and the code I had found suggested a multiplier of 14. Doing the simple maths  (19,200 x 14 = 268,800) showed the resultant sample rate was good for the SDR ranges I found quoted online.

Setting the centre frequency to 868.3Mhz gave me an observed range of 868.3Mhz +/- 134kHz which I thought would cover at least one of the spread spectrum frequencies.

With the settings chosen I started collecting samples into a file for a long enough period that I should have a few transmissions to examine - 100 seconds.

During my research I had come across a tool called inspectrum that was demonstrated in use analysing a wireless signal, so I cloned it and built the app.

The raw samples are contained as 2 byte complex values (one byte real, one imaginary). inspectrum expects such files to have a .cu8 extension which wasn't immediately clear to me.

After adjusting the filename, it was possible to open the file and view the data.

The initial screen wasn't inspiring, but then I am dealing with sparse data and only expect to be seeing data every 2.5 seconds. The screen doesn't cover that large a time range. Navigating the data was simple so as I moved through it it wasn't long before I found something more interesting.

Given the range of possible frequencies and where I had asked the SDR to tune, this looked positive. It also gave me a time index to start looking for the next. And the next.

Just after 5 seconds after the initial burst I found this strong transmission. As the data is modulated I was expecting to see 3 strong bands, which this certainly has. The next step will be to try and analyze the data. 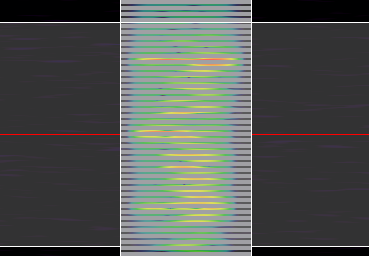 Having found what appeared to be signals from the weather station in the data I captured (read here for more) the next logical step was to try and decode it.

I've finally got round to moving my blog to Ghost though the change has not been simple and I think images may not be fully working yet. I'm still using the default theme though I do plan to change at some point. Hopefully it