Last month our 2010 27″ iMac stopped working. There was no drama, just a black screen where previously had been the High Sierra backdrop. A quick bit of investigation showed that it wasn’t as simple as a dead machine. The fans still blew and when turned off and on it made all the expected noises. There was just no picture. Plugging in an external monitor soon showed that the machine was usable and still functioning normally. After 7 years of service it seemed as if the LCD panel had finally failed.

The law of murphy stalks all such events and this time was no different. We’re in the midst of building a house so buying a replacement iMac wasn’t really an option. Looking at the pricing and specifications the offerings, none seemed like value for money – even if we had the money and wanted to splash out. However, as the machine was my wifes day to day workhorse, we would soon miss the abilities it offered. A solution was needed.

When I built my desktop computer 15 months ago I chose standard, well supported components. Given the travel my work entails it often sits idle, so a possible low cost solution would have been for my wife to use my machine. Her MacBook Air is very old and frankly not very pleasant to use for anything beyond mail and surfing the web while my laptop is more than capable. Of course, my desktop runs Windows and she is happier with the world of Apple. But maybe…

The Dark Side beckons…

Hackintosh is a term I’ve seen a lot, but when I last looked it was very complex and involved a lot of jumping through hoops and using very specific components. Looking again in 2017 revealed how far things had evolved. A lot of reviews and blogs talked about success dual booting a single, home built machine with OSX and Windows. They all mentioned the tonymacx86 website which has a lot of information, tutorials and downloads to help.
Using a monitor I found a suitable USB memory stick, registered with tonymacx86, downloaded the files and shortly afterwards had the USB stick ready for a try. I’ll be honest, I didn’t expect much when I plugged it and powered up my desktop. The black screen with the Apple logo was a surprise. The progress bar slowly filling in was an even bigger surprise but when I was asked to choose an installation language I was glad to be sitting. Perhaps this could work?

Needing somewhere to install OSX on my desktop I found an older disk and after moving some wiring around had it installed and ready to receive OSX. Powering up again and going through the installtion instructions from the tonymacx86 website proved to be childs play and it didn’t take long for the install to commence. The reboots took me a little by surprise, but the process ran without any issues and soon I was filling in usernames and viewing the High Sierra backdrop.
Was everything perfect? No. That would have been too much to expect but I was sitting wondering what I was missing as up to this point it had been too simple.
Continuing with the tonymacx86 installation instructions I ran the MultiBeast app. This presented the first questions that caused me to pause. What drivers did I actually need? Looking at the OSX Preferences app it was clear no network or sound card had been recognised, so drivers would be needed for those. Ticking the boxes that seemed applicable and installing the Clover bootloader all went as expected and I rebooted – to a black screen.

This was, ironically, the same situation as the existing iMac – a responsive computer with a black screen. The fact it had worked previously meant it wasn’t a total roadblock and after some research I copied the USB stick EFI folder over the same folder on the installed bootloader. Rebooting rewarded me with a login screen and working network! The sound card had been recognised and was listed but as my sound is via the HDMI cable I still wasn’t hearing anything. Having a 4K monitor on my desktop has been great, but when running OSX it wasn’t great as the font size was far too small. Without a way to change the display font using the machine was mildly frustrating despite the change from the i3 2010 processor to the i7 2016 processor being very evident.

I tried a few things but wasn’t able to get the sound working via HDMI after trying a large number of different approaches outlined by people. The community seems to be gaining cohesion and the tools are certaiinly improving but I still found myself looking at version incompatibilities, outdated and incomplete instructions that were often filled with abbreviations that meant nothing to me. Clover is an interesting tool but isn’t as user friendly as many claim it to be.

We discovered a fix for the black screen on the iMac during this process. It was a bug related to the iMac goiong to sleep. Armed with this knowledge we were able to restore it to full working order, removing the need for me to continue. While I haven’t taken this any further when the iMac does eventually cease to be usable I will seriously consider building a Hackintosh. A quick costing with suitable components showed that it would save around £1000 over a comparable iMac, resulting in a machine that could be expanded and upgraded. 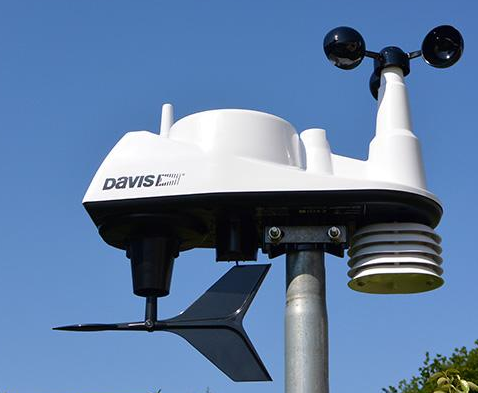 For the last few years I’ve had a Davis Vantage Vue weather station. It’s been great though getting the data in a useful format is far from easy.

For years all I heard from various people I know was “ZFS“. It was the answer to almost every question and given how few OS’s supported it always appeared to be the promised land over the rainbow. That was then, but in recent